One of our favorite parts of ESP Groovy Summer was meeting all of our wonderful and unique new campers. We are grateful to offer summer camp to families all across Georgia and we welcome new ones with open arms. This summer, we welcomed many new campers to our family, and it’s been so incredible to see them transform through their experiences at camp! Here’s an introduction to some fantastic first-timers!

KG made her way into the yellow team’s hearts this summer with her dazzling personality and positive attitude! One thing we learned about KG during our time with her is that she absolutely LOVES to dance. She would start groovin’ as soon as she got out of her car in the morning, and was always up on her feet as soon as she heard music! While KG certainly had an amazing impact on all of the staff and other participants, we’re so happy to see that her time at camp equally influenced her.

One memory of KG that stands out was on our first Bounce House Day of the summer. KG likes having both feet firmly planted on solid ground, and she has always had a fear of inflatables and heights. However, KG’s buddy, Cathleen, was ready to encourage KG to give them a try! In the end, KG didn’t only make it down the inflatable slide, but she had fun while doing it! Her parents couldn’t believe it! Last week, KG went down the water slide not once, but THREE times! “I am extremely proud of her for doing it more than once. It says a lot for the staff that they could persuade her,” says her mom.

KG has also formed many beautiful friendships with other campers this summer, including one with her new BFF, Garrett! KG and Garrett loved spending time together during activities, and it was so heartwarming to see KG ask to push Garrett’s wheelchair around at any chance she got. KG’s mother couldn’t be more grateful for the relationships she’s formed at camp.

“My number one hope in sending KG to camp was that she would make age-mate friends, and she has! She’s made a LOT of new friends and one very special one. I am a happy and thankful mama,” says KG’s mom.

We can’t wait to see KG continue to grow during her involvement at ESP in the future!

Cara is our next new camper this summer, and she has been such a light at the purple site! Known as the “Glitter Fairy,” Cara loves all things pink and purple, and is always ready to bust a move, especially when her favorite artist JoJo Siwa is playing. Cara is JoJo’s biggest fan, and wears a giant bow in her hair just like hers!

At camp, Cara always looked forward to going swimming in the pool at Adventure Day, participating in cooking classes, and drawing with chalk! One of our favorite memories of Cara is when she performed a fabulous gymnastics routine during the “Little Hearts” talent show!

Cara has such a sweet personality, and was always a ball of energy in the mornings. She loved to give all of the counselors and other campers big hugs, and one of her favorite pastimes is getting piggy back rides from her buddy, McKenzie!

McKenzie says that Cara is “the happiest little girl at camp! Her smile is contagious, and her dance moves will brighten your day!”

Cara has made so many strides at camp, especially when it comes to being more open and social with those around her! On her first day of camp, Cara was quiet and didn’t engage much with others, but by the end of the day, she had blossomed! Cara’s other buddy, Julia says that she began talking to everyone and showing everyone “so much love” because “she knew that ESP was a place she could be herself and everyone would ADORE her for it.”

We’re so proud to see Cara soar this summer!

Another one of our new campers this summer was Brady! Brady brought so much joy to everyone at the green site, and his energy made every day fun and exciting! He is so curious about the world around him, and was always pondering interesting questions.

This summer was Brady’s first time ever attending a camp, and his mom was worried that he might be nervous in the unfamiliar environment. However, things couldn’t have gone more differently! Brady was excited from the moment he first stepped out of the car at welcome wagon, and he was always so eager to find out what activities everyone would be doing that day.

Brady is incredibly kind to everyone he meets, and it’s been a pleasure to see him channel that into helping other campers this summer. He really enjoys interacting with  our campers who don’t use words to communicate, and has developed a special bond with a participant named Lenae! Lenae uses a wheelchair and Brady is constantly making sure she’s involved in all of the activities. He always lets her know what’s going on. He even asked her to prom and danced with her the whole day!

Brady has been such a great addition to ESP and has surely made some memories of a lifetime during his time here!

Our next first-time camper is the amazing Cade who brought his sky-high spirit to the blue site this summer! Cade is known around ESP for his unparalleled energy during every camp activity, which has earned him several “hype” awards. He is a HUGE Scooby Doo fan, and sings the theme song (which he knows by heart) each morning during flag. His enthusiasm is always such a great way to start every day!

Cade is also a devoted fan of the Georgia Bulldogs, and wears his UGA shirt for each “Team Tuesday.” Cade’s buddy, Colin, is also a huge fan, and him and Cade love discussing all of the latest Bulldog news.

Colin describes Cade as “the GROOVIEST buddy anyone could have! It is so easy to brag on him and he is the most hype camper at ESP!”

It’s been incredible to see how quickly Cade has made a home at ESP. Since his first day, Cade has left all of his inhibitions at the door, and embraced every activity and person at camp! His confidence has truly grown through all of the cheers and support he’s received during his time here.

Cade is already so loved by everyone at the blue site, and we know he will have the same  impact on the rest of ESP when they finally get to meet him!

Now we have the dazzling Ruth who brought her amazing dance skills to the orange site this summer! Ruth always had a smile on her face, and she loves Moana! During the talent show, she danced to “How Far I’ll Go” and even had a lovely dress to match.

Ruth loves everything Disney, pink, and our bounce house days! She would stay at the bottom of the water slide splashing around, and on messy days, her favorite thing to do was to get her friends wet!

Bart describes Ruth as “the sweetest buddy anyone could have! Ruth is so easy to get along with and loves to have fun!”

Ruth has shown true joy at camp and her mother was amazed at all her progress she made at camp. She shined on stage at “Little Hearts” where the first week she was at camp, she was shy and hesitant about showing off her dance moves.

“In the midst of all that the world is experiencing, ESP has been an oasis for Ruth. I don’t know what else Ruth could have done to make her life happy in the midst of this pandemic. I am so grateful to you and ESP for giving Ruthie joy,” said Ruth’s mom Ericka. 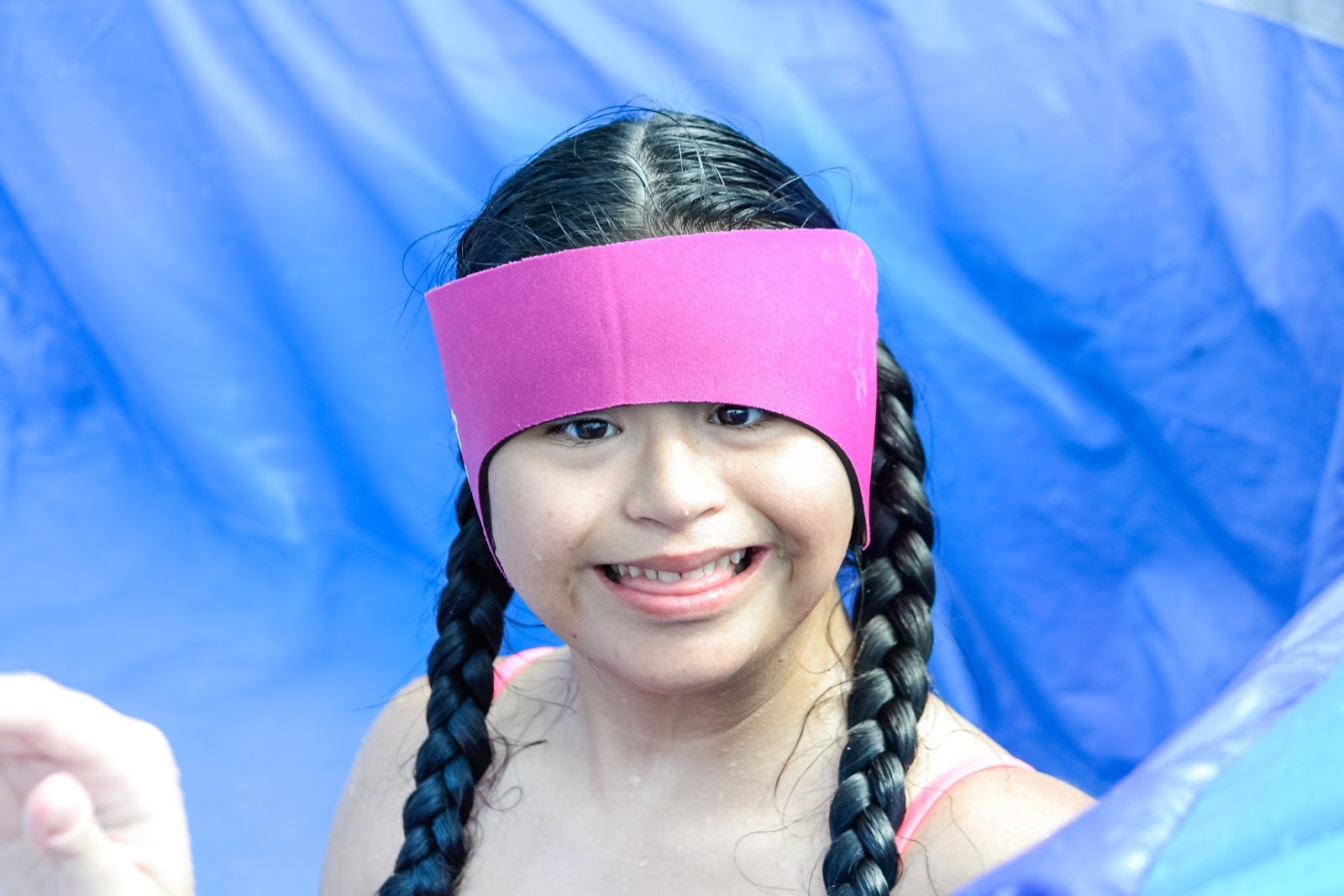 Last but not least is the awesome Luciano! Luciano is known around the red site by his nickname “Lucci” (as in Gucci), which was given to him by his buddy, Ryan! At camp, you can always find Lucci running around, and participating in tons of physical activities, like sports.

Lucci is fluent in spanish, LOVES Disney movies and songs, and always looks forward to delicious afternoon snacks! One of his favorite days is Bounce House Day because he can go down the water slides and jump in the inflatable castle!

When Luciano first came to camp, he was a little reserved, but as the week went on, his buddy saw him open up and start to feel comfortable in his new environment. Lucci soon began THRIVING at camp! He enjoys laughing with all of his friends, playing with the blow-up car-wash man during welcome wagon, and getting lots of tickles from his buddy!

It’s been wonderful to see Luciano break out of his shell this summer!

We’re so happy to have camp this summer and were able to get to know our new campers and create unique experiences for them. While many camps were closed, we were a lifeline to many families looking for camps for their children. We’re so lucky to have been one of the few camps open for people of all abilities, and thus, we made tons of new friends! Our new friends transformed before our eyes and had a magical time at camp.

Summer camp is more than just fun, it is “play with a purpose” where our campers work on goals, social skills, fine motor skills, and more disguised as fun activities. One camper named Emily even learned how to button her shirts this summer!

We know that their continued involvement at ESP will result in even greater development for these new participants, and we can’t wait to be a part of that journey!