Posted by: Haley Lacuesta
Posted in: The Heart of ESP, From the Inside Out

Big 3 events are the best way for families to introduce children of all abilities to ESP. For Cathy Kesterson, a long-time and dedicated ESP mom, they are a way to show her support for an organization that has greatly impacted her family’s life.

If you speak to Cathy today, she won’t hesitate to sing ESP’s praises. ESP provides a community, a place of respite for parents, and an opportunity for her daughter, Kyla, to have normal interactions with her peers.

“I have a profoundly disabled child,” Cathy said. “ESP, and the counselors and volunteers, that’s the only group that I trust completely with my child, and I don’t leave my child with many people.”

Her daughter Kyla has cerebral palsy. Because she is a wheelchair user, non-verbal and has medical needs that require constant and careful attention, Cathy realized early on that her daughter’s experience through life would be much different from a girl without a physical disability and did not see further involvement in ESP as attainable at first.

So, they connected with ESP slowly, starting with smaller events where the family became more comfortable with the culture, cast and crew of ESP. By the time Kyla was a teenager, she participated in day camp for the first time and would later become a regular participant of 360.

Today, every moment spent with Kyla, her husband and her 13-year-old son Ben is done so with purpose. Time warmed Cathy Kesterson up to ESP, and over the years, both Kyla and the rest of the family have become more involved. A dedicated ESP Mom, Cathy has participated in the Big 3 time and time again and recounted some of her personal highlights and her own advice for parents of children with disabilities.

“When you drive away from an event, any three of those events, you literally think you’re better for having been there,” Cathy said of the Big 3.

She has participated in Big Hearts, Big Trail & Tug, and Big Jump for several years now. She has been a part of a tug team, watched her daughter at Big Hearts as both a contestant and a performer, and even jumped out of a plane at Big Jump: 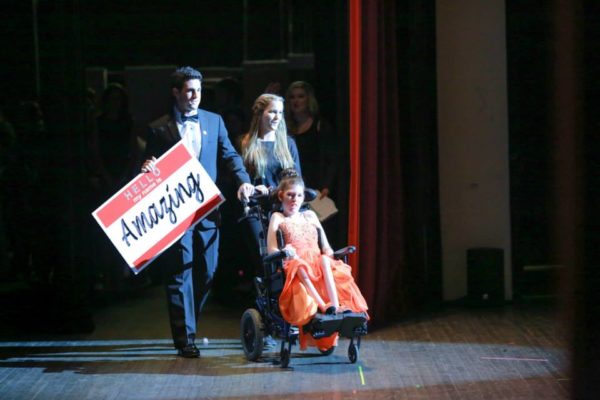 Big Hearts is the next Big 3 event on ESP’s roster. Set for February 9th, 2019, the yearly pageant and performance come complete with a silent auction, performances and the opportunity to get to know the 50 contestants on stage along with a Banquet.

“It’s just such a lovely evening,” Kesterson said of Big Hearts. The highlight is giving participants a moment in the spotlight; especially since children with disabilities are often left to fade in the background. At Big Hearts, Kesterson says, they are all given a chance to shine.

“Each and every one of those children amazes me every year with what they can do. do a great job of really pulling each one of their best qualities and putting them where they can perform.”

Cathy likened Big Jump to a big festival; complete with food and games for her family to enjoy. She skydived out of a plane to spread awareness about people with disabilities; and the stereotypes that go along with it.

“It was on my bucket list and I wanted to help in any way I could,” she said, “but to watch participants jump out of a plane; that’s amazing in and of itself.”

It was a testament to the resilience of individuals who are constantly told what they can’t do. And if they could do it, there was no excuse for Cathy not to.

Anyone who has ever participated in Big Trail & Tug knows that it’s a muddy good time. This past Trail & Tug was marked by a long week of rainy weather, leaving the course and mud pit especially slippery.

Despite this people still came out with their tug and race teams with full enthusiasm, said Cathy.

“I’m always amazed at people who have no connection to the disability community other than maybe knowing someone distantly who are willing to take time out of their day to participate,” she said.

“My husband came with a group of contractors; just a rough and tumble group of guys. They took time out of their Sunday just to be a part of what makes ESP.”

There is no denying that Cathy’s stories have a common theme: Empowerment for people with physical and mental disabilities and a chance to celebrate their uniqueness with families and loved ones.

“When they’re around the Big 3, these kids are just another kid showing up to play. In a world where they do get put aside and treated so differently it’s so much fun to see them at these events where they’re just cutting up with other kids.”

“I have a profoundly disabled child. ESP, and the counselors and volunteers, that’s the only group that I trust completely with my child, and I don’t leave my child with many people.”

If you are an interested parent, there is no greater example of ESP’s mission than the Big 3 events. Cathy said it’s the reason that she continues to give back to ESP and support others who have similar experiences.

You can catch Cathy, Kyla and her family on February 10th, 2019 at the next Big Hearts pageant! Click here for more information on tickets, the silent auction and other ways to get involved.