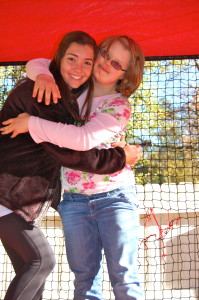 Saturday, November 10th was our monthly Club event. This month the theme was ESPalooza! There were a variety of different activities for the children to partake in throughout the day and then a dance party to finish it off!

This month we had some volunteers who were truly amazing with our extra special kids.  It was the Leonard Scholar through Terry College at UGA; they jumped right in and, even if they were not buddied with one of our kids, they were helping run stations and were completely engaged the whole time! With their help and the help of a few other groups, as well as our usual volunteers and staff, Club was the most successful one yet! 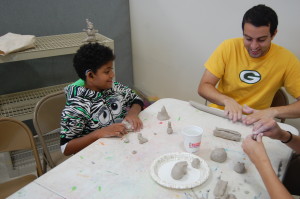 The stations we had consisted of molding clay, baking, playing rock band, jumping in a bounce house, outdoor games such as football and soccer, an “insect zoo,” and snack. The favorite station seemed to be the bounce house, which was constantly packed. There were some children who absolutely loved Rock Band and the fact that the older boys who were on staff would play along with them. There were others that we couldn’t get to leave the insect zoo. They sat in amazement of the different butterflies, cockroaches, and other insects that they got to look at and touch. 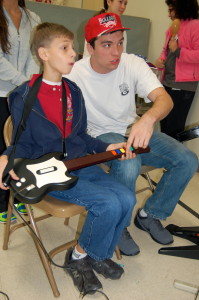 One of the most fun things at club is the food that the kids get to eat that probably do not eat on a daily basis. For snack the kids hadrootbeer floats and then they had cookies from the baking station, which they baked themselves and then decorated! After snack the kids were all on “sugar high” and were definitely ready for the dance party!

Matt Whitaker played the guitar and the kids suggested songs they wanted and then sang along anddanced their hearts out. After singing and dancing, some of the kids went back to play one last round of Rock Band or jump in the bounce house one more time before it was time to head home. There is no other place I would have spent my Saturday than with the precious little ones at ESP – giving them a day filled with fun and laughter that they will remember for a long time! 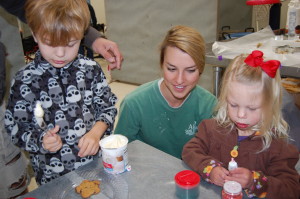